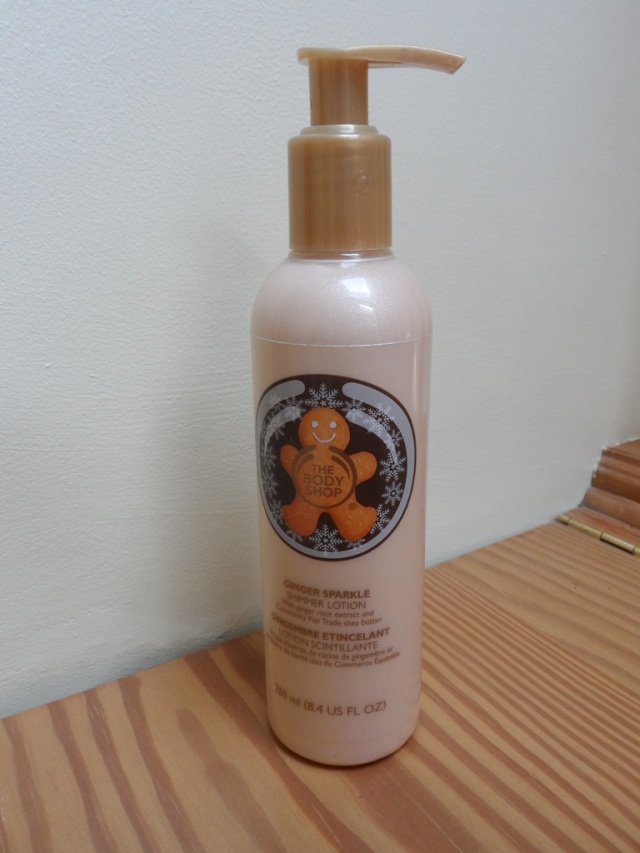 I was in two minds about whether to write a post on this product, as it isn’t available in the shops at the moment. The Body Shop’s ginger range was limited edition at Christmas 2013, which is when I was given this. In the end I decided to write this, partly because it is bound to be back next year and partly because you can get it on places like eBay and Amazon if you look hard enough.

The Ginger Sparkle Shimmer Lotion is very much exactly what it sounds like. It’s a ginger scented body lotion which leaves shimmer on the skin.

First thing’s first: scent. Boy is this one strong! It might have a picture of the gingerbread man on the front, but I wouldn’t say it really smells like that. It’s more like pure ginger, rather than the added Christmas spices. It’s a nice smell (if you like ginger) but it’s a bit of an odd scent to be rubbing on your skin. It’s definitely an acquired taste (and would have been much better to use at Christmas time than in March…).

Next, let’s talk sparkle. Does this shimmer? Why yes it does. You don’t notice when you initially apply it, but the minute you catch the light, your skin will glisten or shimmer, but not in an excessive way (that would look a bit silly). It would be great to apply before a night out to make you feel a bit more glam.

The lotion itself is an absolute dream to apply. It glides on super easily and absorbs within minutes. I find the Body Shop Body Butters leave the skin feeling a bit claggy for ages after, but you can virtually put your clothes straight on after using this. That makes me think it’s more of a product for the shimmer and Christmas sparkle than it is for hard core moisturising your product.

All in all, it’s not my favourite product in the world, but it would be great to get you in the festive spirit in the run up to Christmas and before a Christmas party. I think I am now going to put mine away till November. I look forward to getting it out again when I need some festive cheer!